"Man is not free unless government is limited." (Ronald Reagan)
"When one gets in bed with government, one must expect the diseases it spreads." (Ron Paul)
"All that is necessary for the triumph of evil is that good men do nothing." (Edmund Burke)
"Nice job on the website!" (John Noisy Hawk)

Make a Difference! Get Involved!

With the second Senate debate falling at the same time as our regularly scheduled meeting we will be switching formats this month and spending the majority of the meeting watching and supporting Susan Collins in the debate. The screening will be set up in the billiards room of the Portland club up on the second floor.

The debate starts right at 7 pm so you may want to arrive a few minutes early so you don't miss anything!

After the debate is over we will have a very much abbreviated meeting in the conference room on the second floor (where the August meeting was held).

Our October happy hour will be held at TBD from 6-7:30 pm Thursday night, October 8.

Portland Republicans caucused with South Portland Republicans in South Portland at the South Portland Community Center on Saturday, February 8 from 8 AM to 11 AM.  Among the orders of business was electing delegates and alternates to the State GOP Convention, set for May 1 and 2 in Augusta.  Besides electing delegates to the State Convention, we elected our requisite number of members to the Cumberland County Committee, re-ratified our by-laws, and re-constituted ourselves as a municipal committee.  We also had Jay Allen, GOP candidate for the 1st Congressional District address the room.  Besides that, our treasury got a little bump as we took in $30, our share of the 50-50 raffle.

If you are interested in attending the State GOP Convention, there are still slots available.  Please contact Steven Scharf, Portland Delegation Chair. 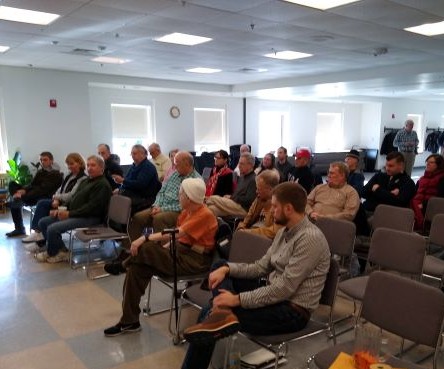